AFC Dunstable started life as Old Dunstablians Football Club in 1981. The name Old Dunstablians originated from an organisation formed in 1888 for old boys from Dunstable Grammar School. The most famous member of the club is Hollywood actor Gary Cooper, who attended the school in the early 1900’s.

When the Grammar School closed and Manshead School opened they took over the mantle but the old boys club was in decline. In 1981 the head teacher was asked if he could re-launch the name, hence the football club was born. By 1988 after its centenary, the Old Dunstablians Club ceased to exist, but the football club carried on in commemoration and to this day still bears the club crest on its badge.

The club started in the Dunstable Alliance Football League for a couple of seasons then moved onto the Luton District and South Bedfordshire League in 1983. Still playing at Manshead School with the 1st team and reserves, success was limited with the 1st team runners up twice in Division One and runners up in the

William Pease Cup. While in the Luton League though the 1st team did land the Bedfordshire Junior Cup beating Leighton Athletic on penalties in 1989/90 season.

With the club using Dunstable Town Cricket Club as their social base in Bull Pond Lane, the cricket club was looking to move to a larger site in Totternhoe and when the new club was opened in 1994, a football pitch was accommodated, so the football club moved there from Manshead School.

An improvement in facilities gave the club a chance to apply to join the South Midlands League in 1995.

Accepted into the then Division One (Premier and Senior Divisions were the higher divisions) the club struggled, as they flirted with being relegated straight back to the Luton League in the first 2 seasons. Going through new managers every season, they finally started to gain some consolidation and in season 2001/02 the 1st team finished 4th in the league and won the Division One Cup. The following season they just missed out of the title, which was now named Division Two. Looking to go one better they finally clinched the title the next season and was runners up in the Division Two Cup. Ground grading issues were now starting to stop the team from getting promoted, as 2 ground sharing agreements were turned down by the league. 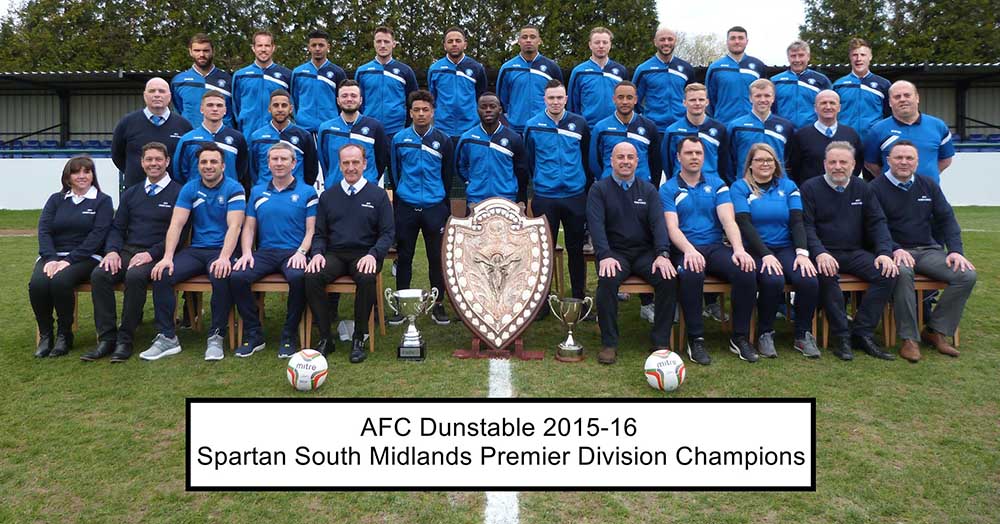 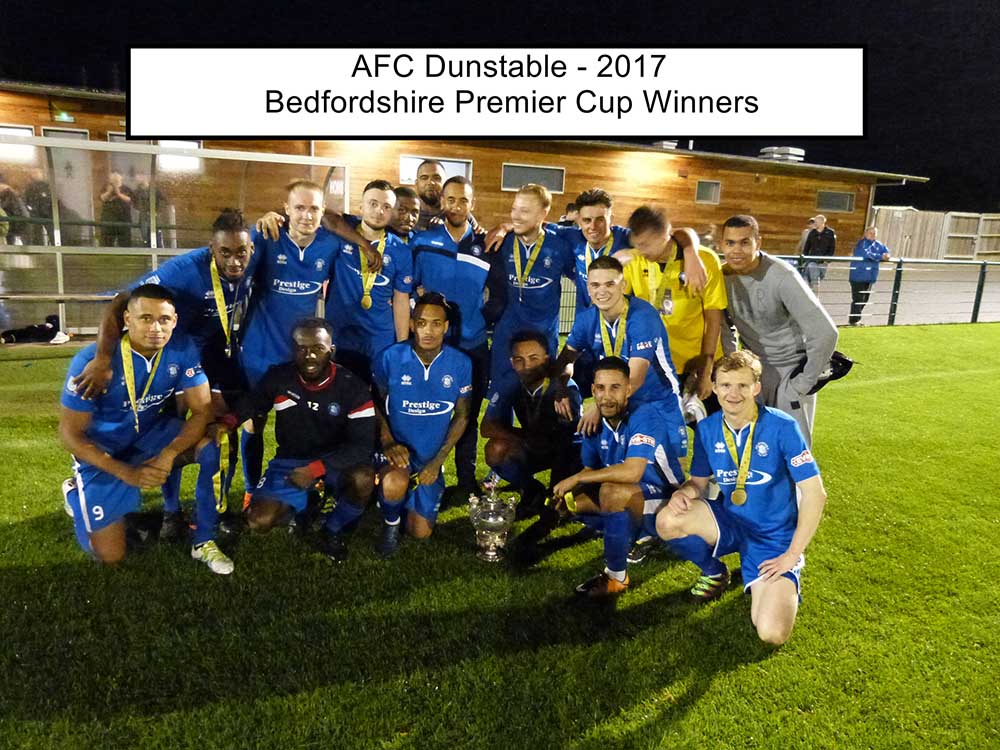 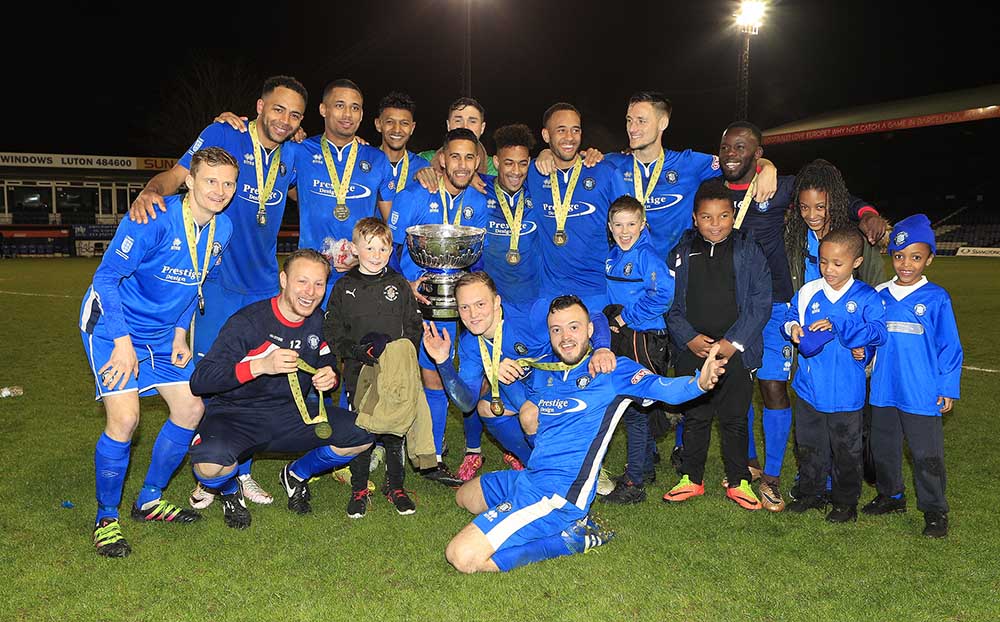 This was now the start of a trophy laden period, as the Division Two title again was secured and back-to-back Bedfordshire Senior Trophy’s. Added to that, the Division Two Cup was won again.

In 2003/04 the club decided to launch its youth policy and when the Under 15’s were runners up in the Chiltern Youth league, it started on the path to work its way through the FA Charter Standard. They achieved Adult status in 2003/04. The club then made the decision to change its name to AFC Dunstable (when the prefix AFC was not as prevalent as it is nowadays), so not to get confused with the local rugby club, as the club started to grow and the name was more associated to a football club. The club kept the name The OD’s, as their nickname. The youth setup was awarded the Charter Standard in 2005/06. The next big step was to become a Development Club and a great deal of work saw the club achieve this in 2007. Next up was a goal to become a FA Charter Standard Community Club and 2008 saw the club achieve this. In that time the club has been awarded the Development Club Of The Year in 2008 and the Community Club Of The Year in 2009. The club now runs over 30 teams.

The Bedfordshire Football Association approached the club to become partners in the new Creasey Park Community Football Centre in 2008 and this gave them the chance to move the 1st team to Creasey Park and apply for promotion to Division One for the start of the 2009/10 season, which was accepted. The team finished a very creditable 5th in its first season at the higher level.

History was made in the 2010/11 season, as the team was accepted to participate in the FA Vase. A fine run through to the 2nd Round Proper was achieved. Looking to improve on the league position the previous season, the team went all out for promotion and finished runners up in the league and gained promotion to the Premier Division at their 2nd attempt. The SSMFL Division One Cup was won too.

The team were being managed by the most successful pair in the club’s history; Alex Butler and Dermot Butler, but they decided to step down after 9 years at the helm halfway through 2013/14 season. This left the team in disarray, which saw many stalwarts of the team leave. The club decided to appoint current manager Steve Heath and the club went on a re-building exercise.

2014/15 saw the team secure 3rd place in the SSMFL Premier Division as they challenged for the title all season. They also equalled their best run in the FA Vase getting to the 3rd Round proper.

2015/16 was the season that the team broke all club records. Before clinching the SSMFL Premier Division title, they progressed through 2 rounds of the FA Cup before finally going out to Ryman Premier leaders at the time Leiston 1-0 in the 1st Qualifying Round.

The FA Vase was a great ride as the team made it to the 4th Round proper. Unfortunately, we drew phoenix club Salisbury who had competed in the Conference Premier only two seasons previous but had been demoted to step 5. Going out 3-0, Salisbury made it all the way to the semi-final.

The league campaign was an unbelievable roller coaster ride. As the season got underway, it was becoming apparent that quite a few teams were vying for the title. As the season reached October, only 5 points separated the top 6. By Christmas it looked like London Colney were starting to break away going 5 points clear. The chasing pack were bunching up behind as only 6 points was the difference between 2nd and 7th. When the team lost to a last-minute penalty to Biggleswade United on January 2nd, they went 8 points behind London Colney and it looked like the title ambitions had faded. That would be the last time AFC tasted defeat in the league. Hoddesdon Town were now becoming a title contender and it was a 3-horse race. With 7 games left, the team went top of the league and never looked back and won the league by 13 points.

The 2016/17 season saw them compete in the Southern League Central Division, a position they never ever thought they would see the club at. They competed nearly all season in a playoff place but just missed out by 3 points. The team though did pick up some silverware winning the prestigious Bedfordshire Senior Cup 2-0 against Dunstable Town at Kenilworth Road. The beginning of this season, the Bedfordshire Premier Cup was also won.

After only their 2nd season at step 4, 2017/18 saw them top the table at the start of the season. They occupied a play-off place all season, which in the end saw them finish 5th. So, a semi-final play-off berth was achieved and they came up against Hartley Wintney. A 2-0 loss in North Hampshire ended their season but what a great experience it was.

2018/19 season saw them make it 3 years in succession to play at step 4. It was probably their most challenging as they stuttered at the start of the season. At Christmas they were flirting with relegation but turned the corner and went on a decent run that saw them looking at an outside chance of a play-off spot, but they fell away and finished 10th.

The 2019/20 season is the one that everyone will want to forget, as the covid-19 pandemic saw the season voided in March. At the time, the team were in 15th place and a mid-table finish was the most likely outcome.

With the club firmly established at step 4 everyone is looking forward to the 2020/21 season and the challenges that will bring.