first ever game. The club was formed by teachers of Manshead School Dave Neasham & Neil Smith along with ex pupil Gary PoIer. The team was made up of a mixture of teachers, current & ex pupils playing in the Dunstable Alliance Football League Division One, the first game was against Leedon with the game finishing in an entertaining 3-3 draw.

So here is the squad for that first game, in no particular playing order.

Other players who played that season are Paul Marlow, Lee Blinco, Mick Robinson, Andy Downie & Warren Tomlinson. Even though Dave Neasham and Gary PoIer missed the first game, they played every other game that season. Paul Marlow ended up top scorer with 22 goals. The team finished 3rd in the table with The Pheasant winning the league & Edlesborough runners up.

Now after all these years, the club have massive gratitude to Dave, Neil & Gary for forming the club in 1981 and without them, thousands of players would not have had the opportunity to represent our great club. 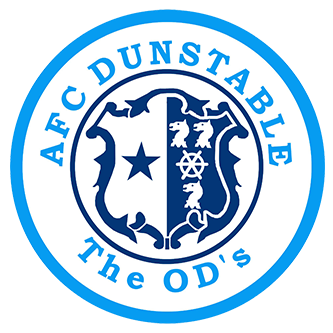 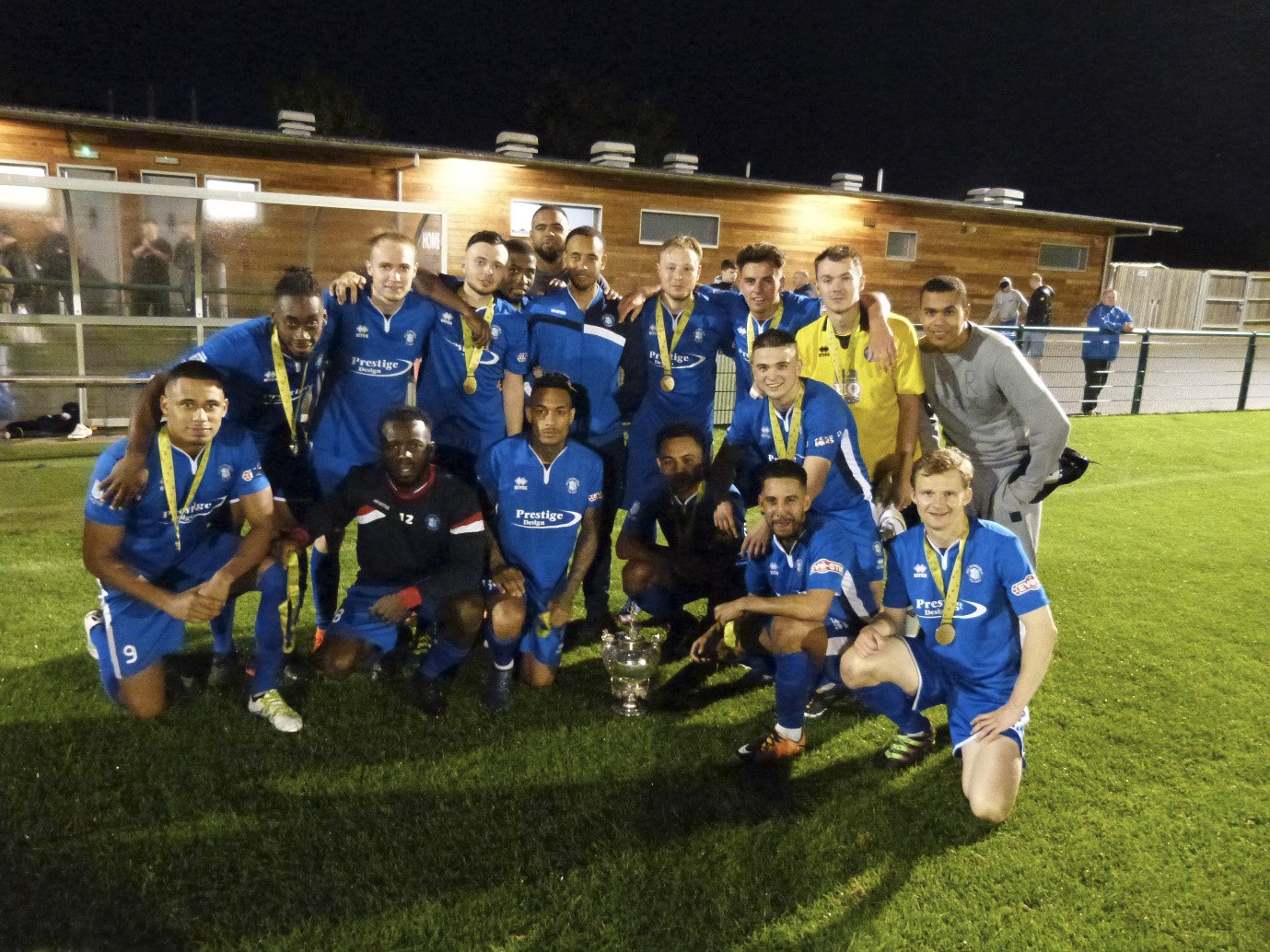 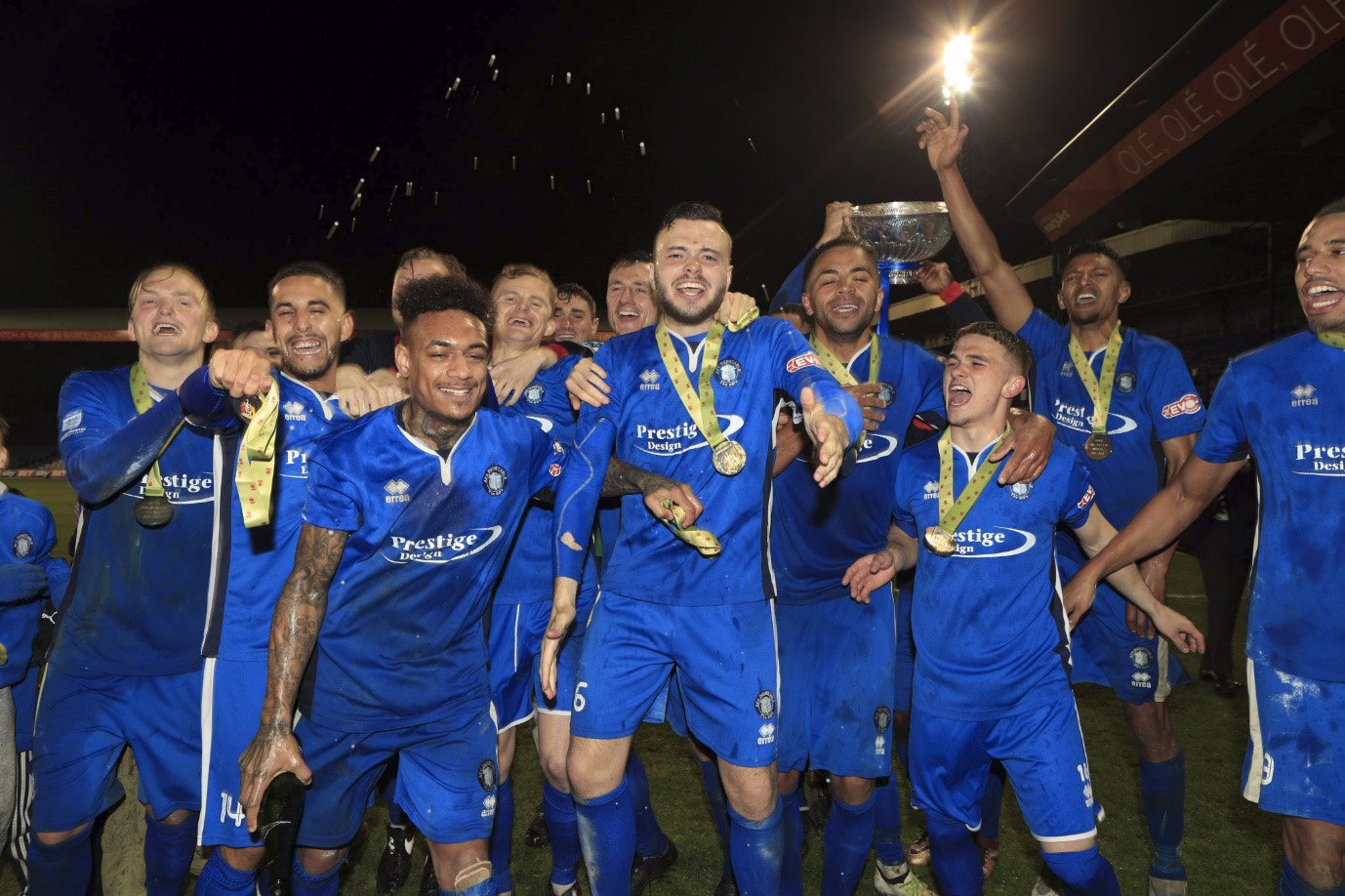 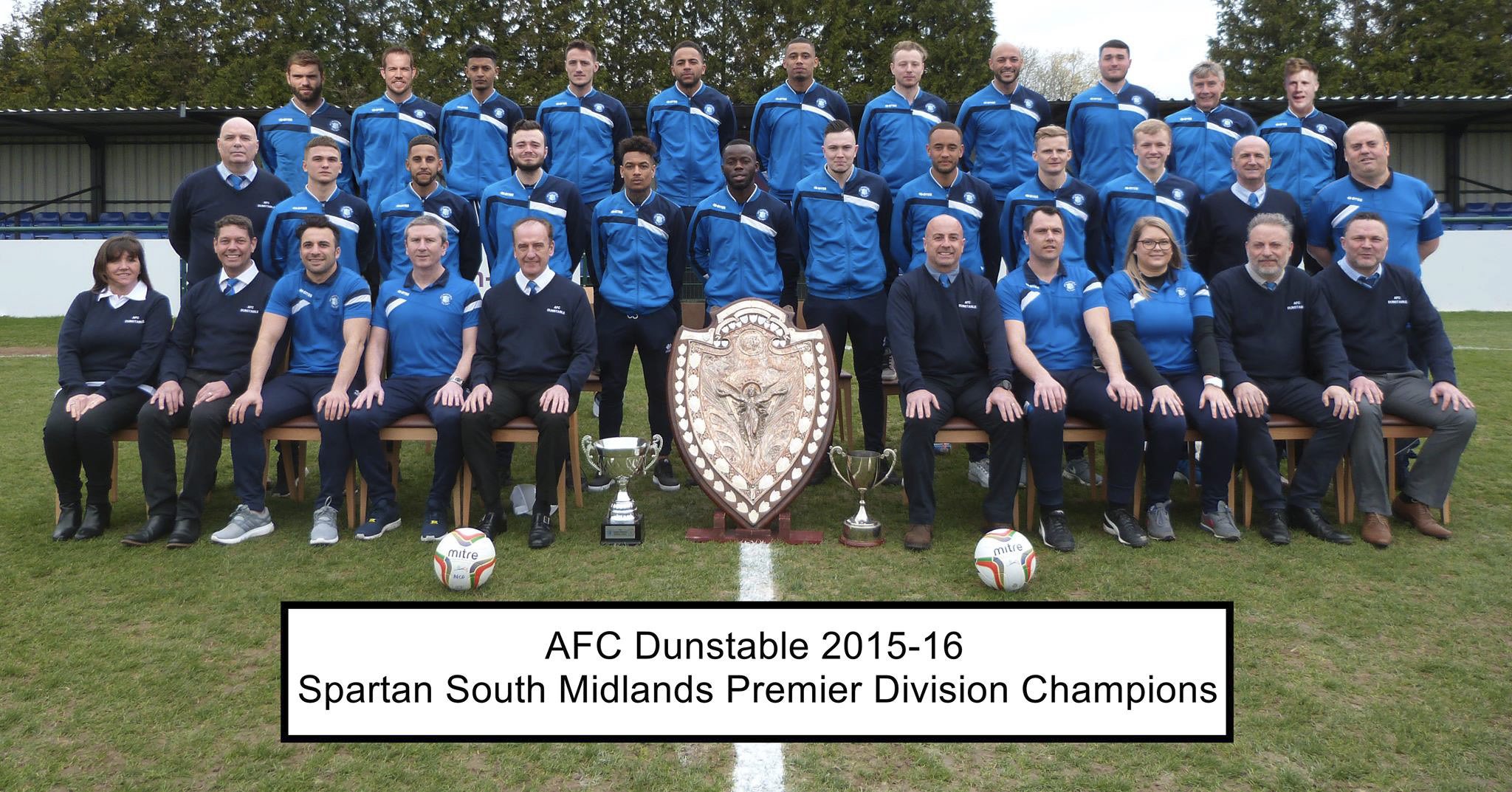 London Colney & Hoddesdon Town pushed us all the way but unbeaten from January 2nd to the end of the season wore them down which was 22 games.

BJ Christie notched 50 goals & Jermaine Hall hit 26. The team scored 143 goals in all competitions. Also got to the final of the Bedfordshire Senior Cup only to lose 2-1 to an injury time winner v Barton Rovers at Kenilworth Road. 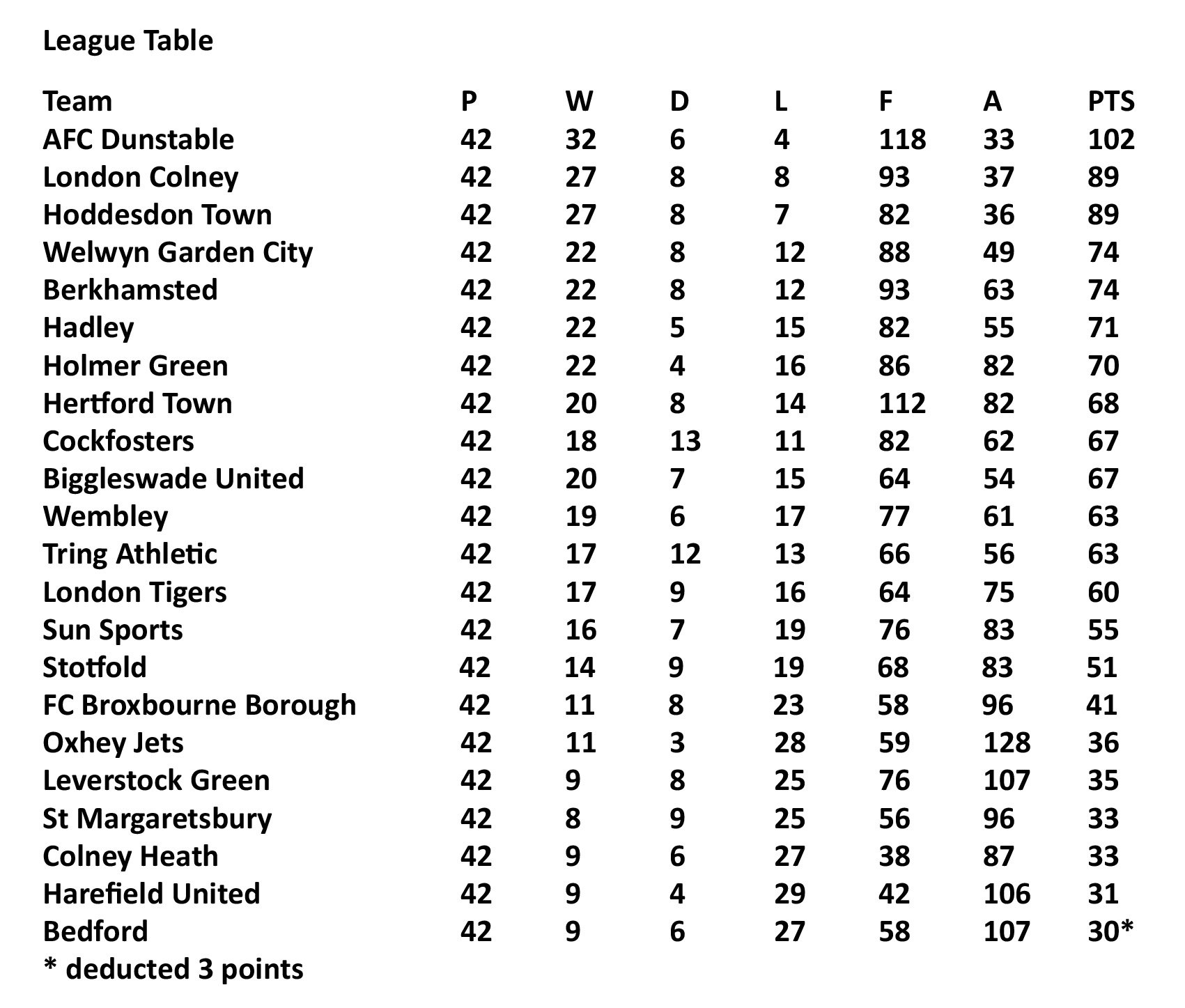 Retained the trophy with a goal from Chris Hemmings 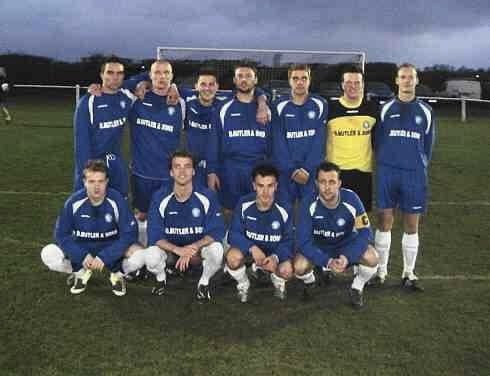 Great season as the Spartan South Midlands Division Two title was won & the Bedfordshire Senior Trophy with a 4-1 win over Bedford United.

In the league the team scored 124 goals in only 30 games & in all competitions James McCarthy scored 70 goals in 44 appearances.

The team was managed by the “Butler brothers” 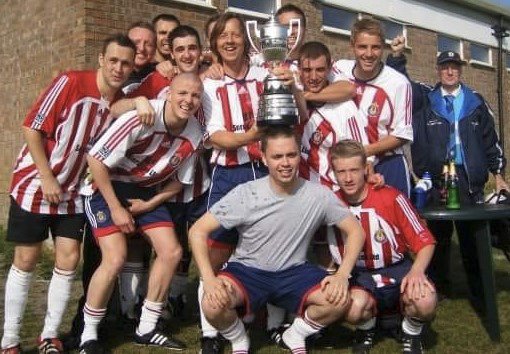 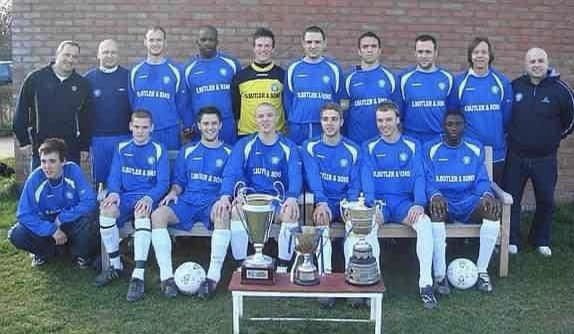 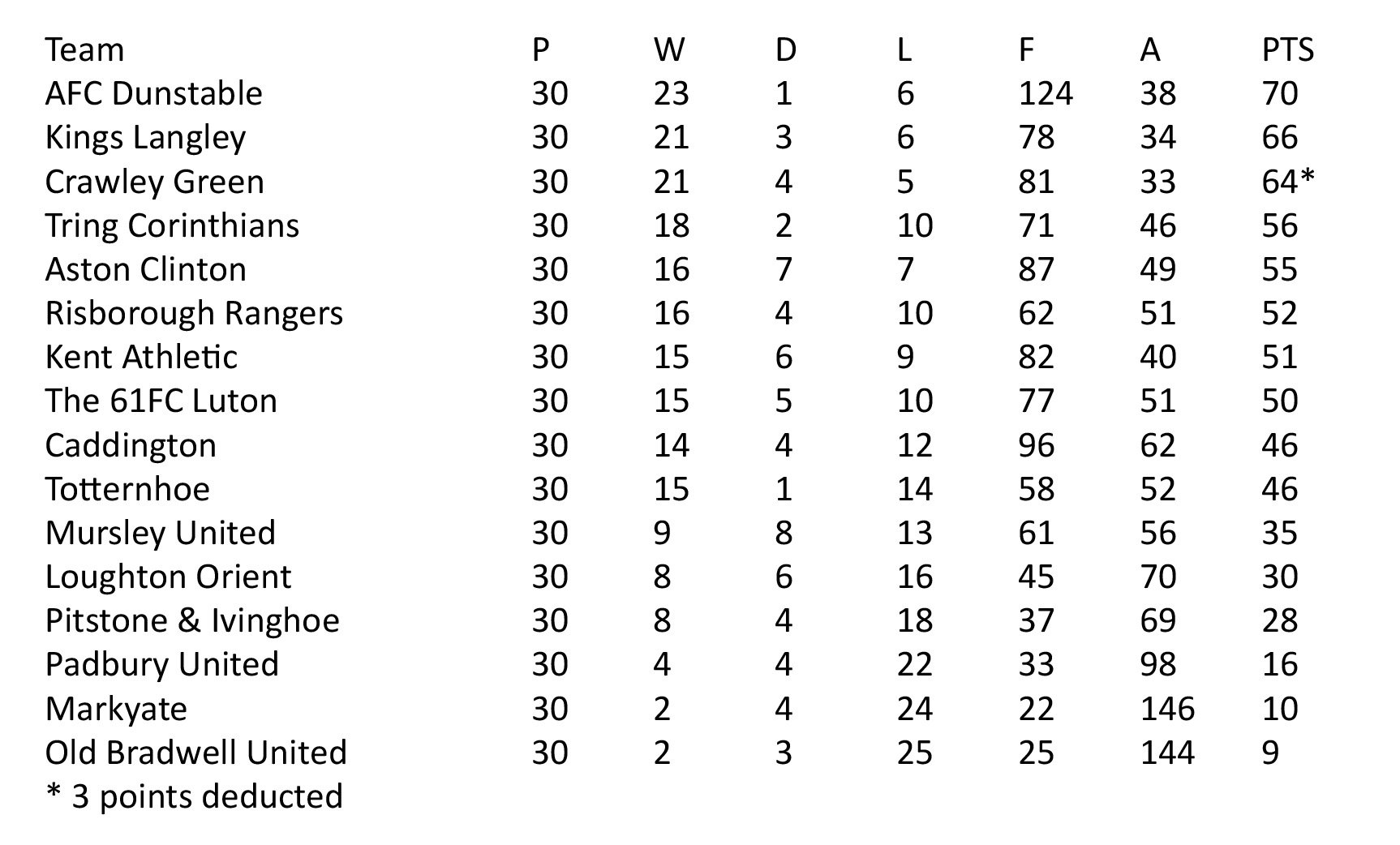 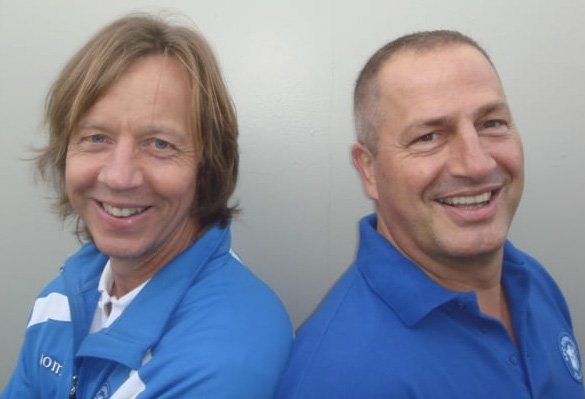 AFC Dunstable invited Luton Town to take part in a friendly game in the memory of David Preece. The Hatters sent a full strength squad which showed as they were 6-0 up by half time. The final score was 7-1. Their squad includednfamiliar AFC names Newman Carney & Alasan Ann. Also in the Luton team was Andre Gray who went on & played in the Premier League for Burnley & Watford.

The game drew a crowd of 1,146, which is a record attendance for the new Creasey Park. Some things never change as BJ Christie got AFC’s goal. 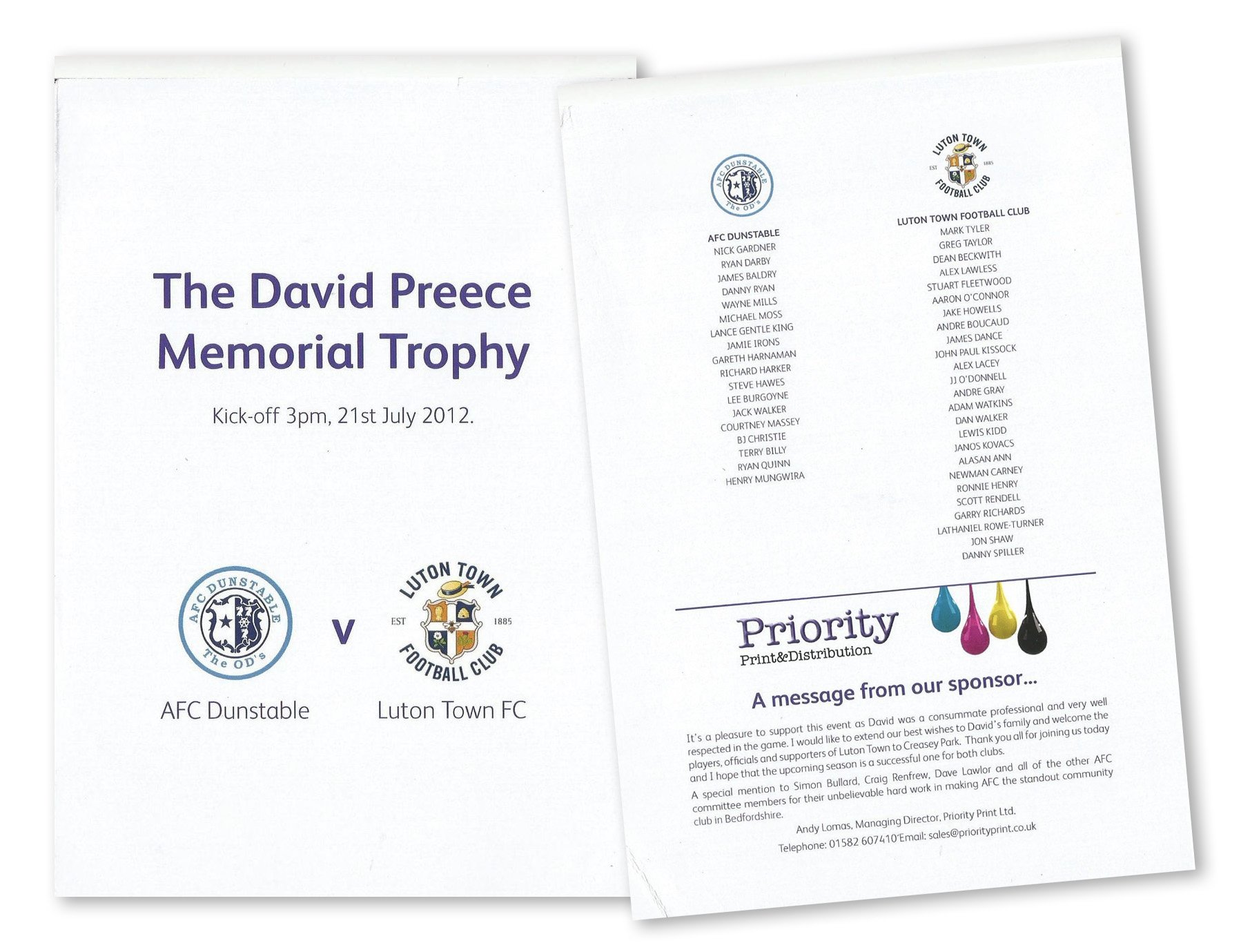 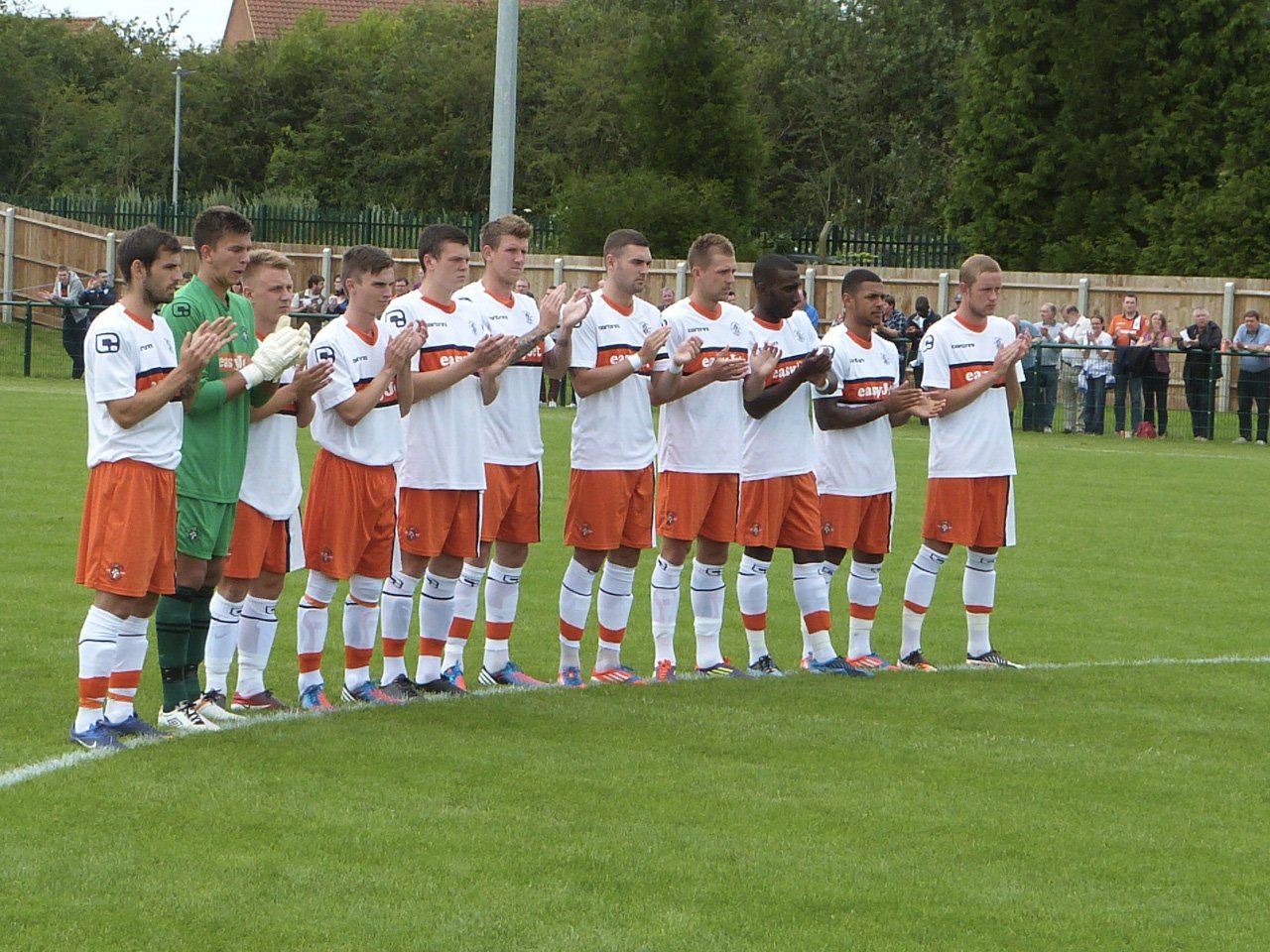 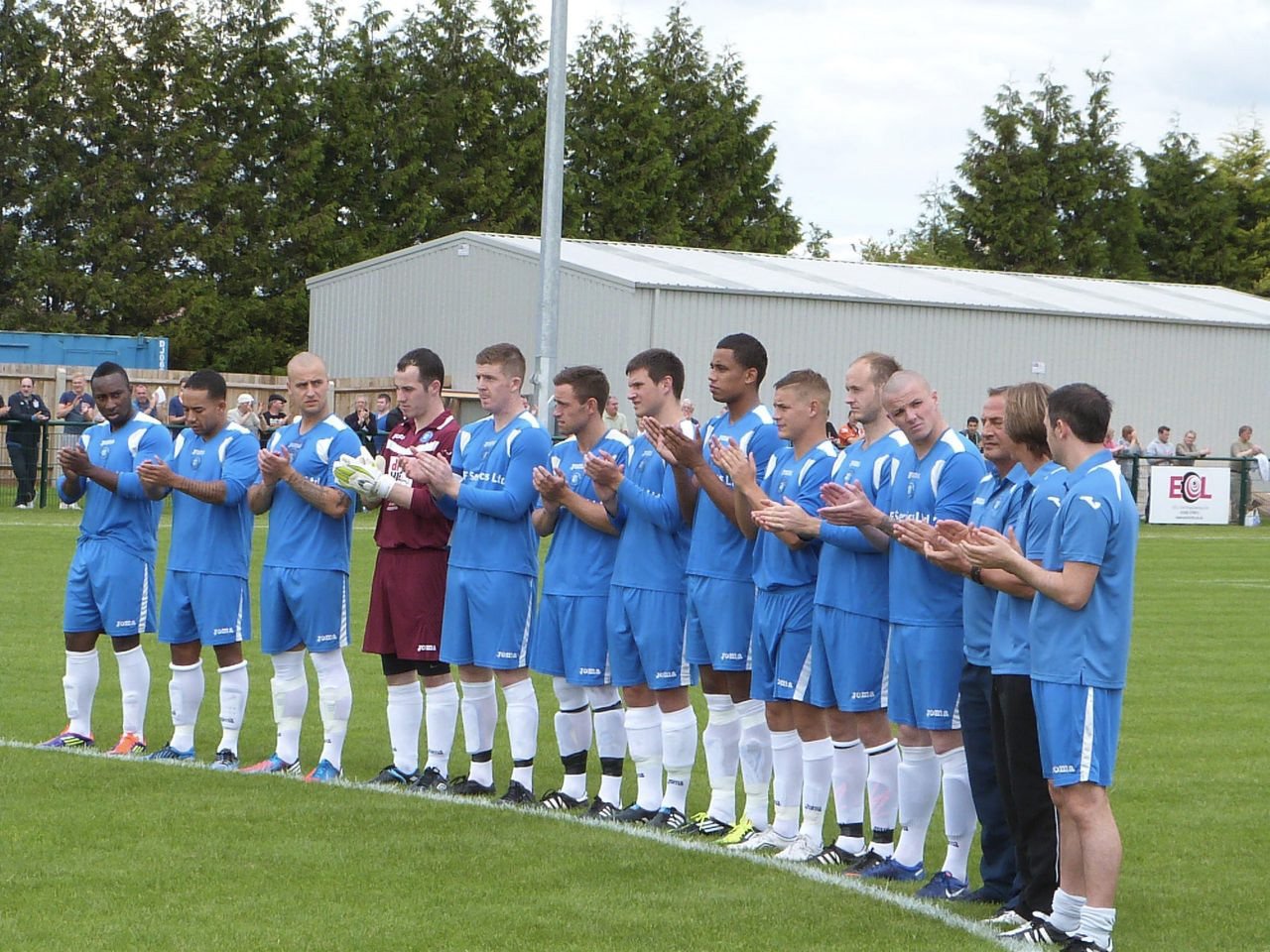 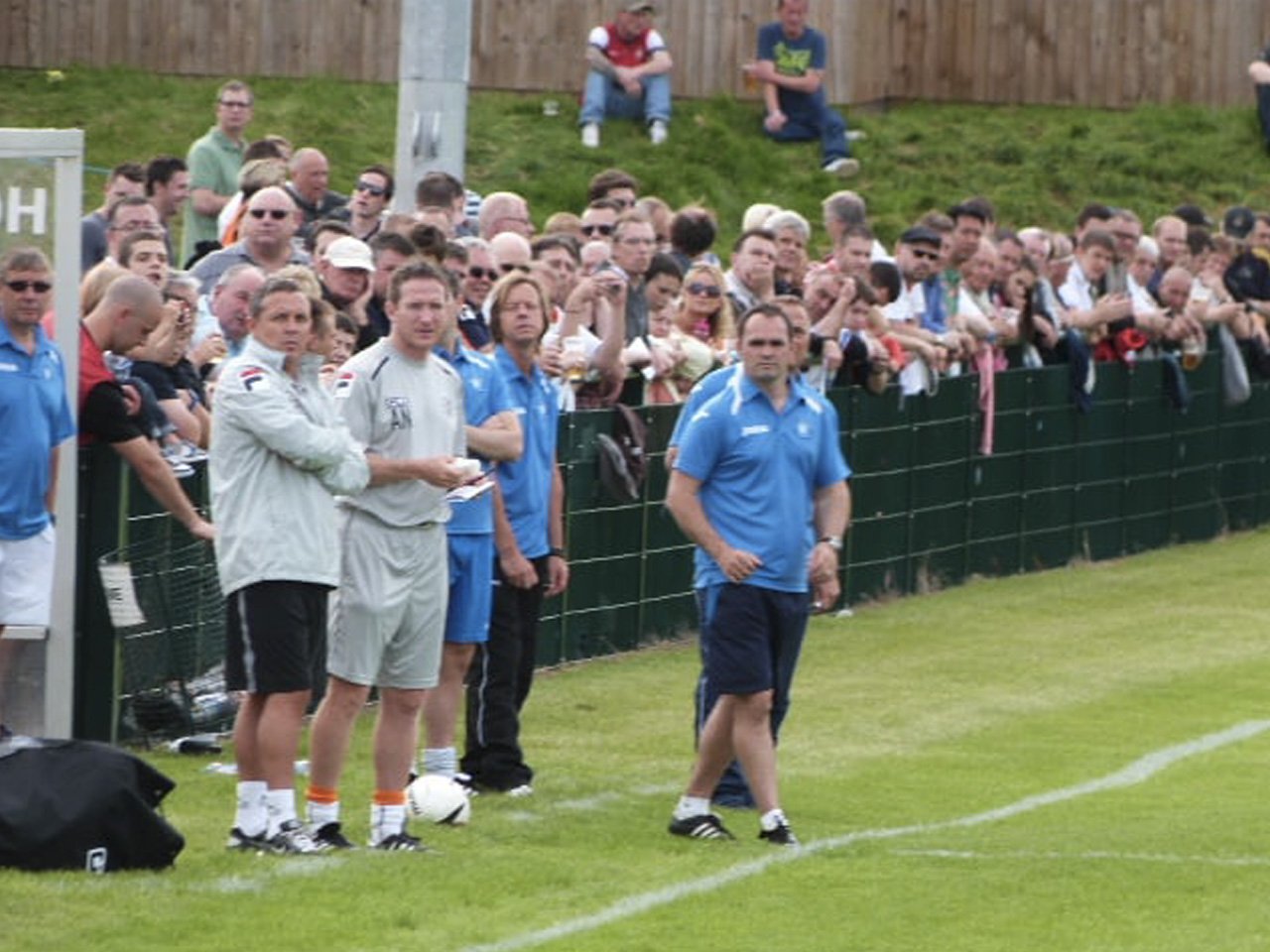 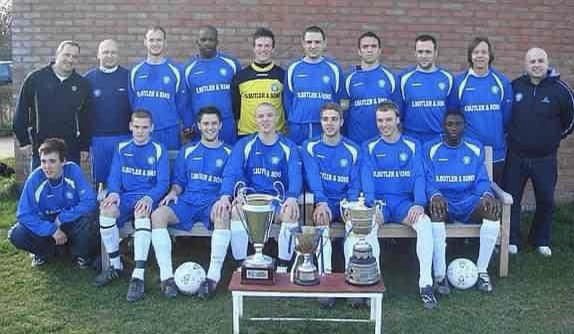 Back then the club was Old Dunstablians FC.

Winslow United pushed the OD’s all the way but eventually fell away as the season got to the business end.

Winslow did though get revenge as they beat the OD’s 1-0 in the final of the Division Two Cup on May 11th. 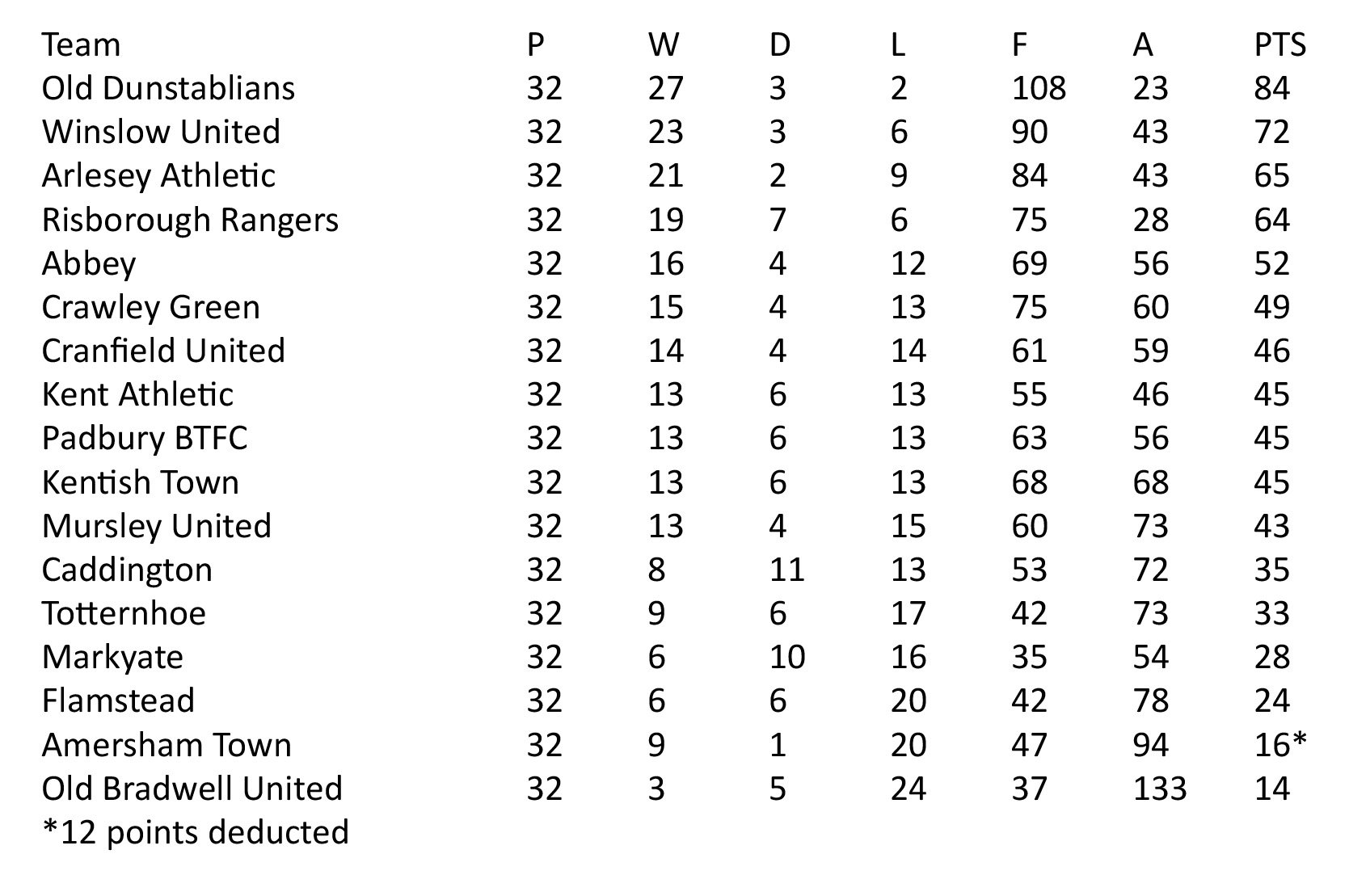 This was the clubs first trophy after an exciting final which went to penalties. 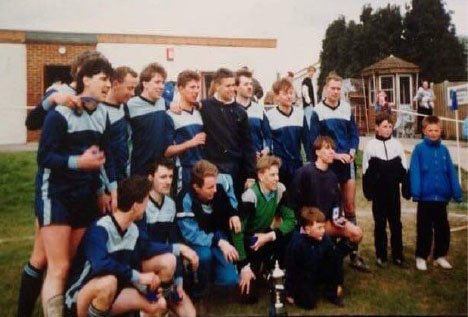 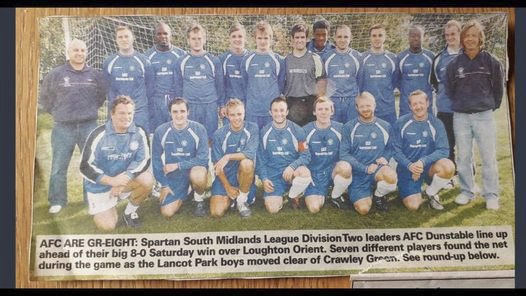 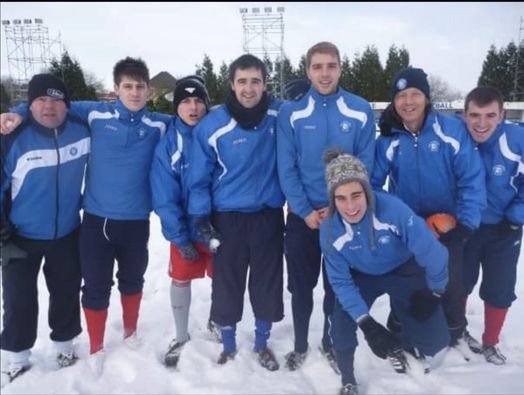 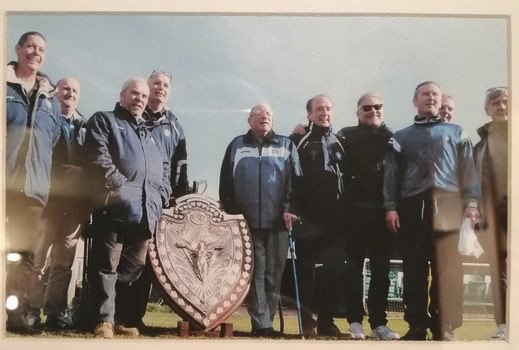 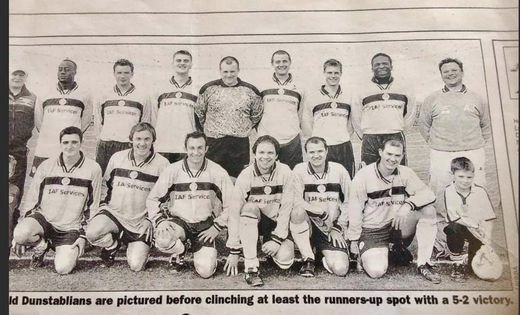 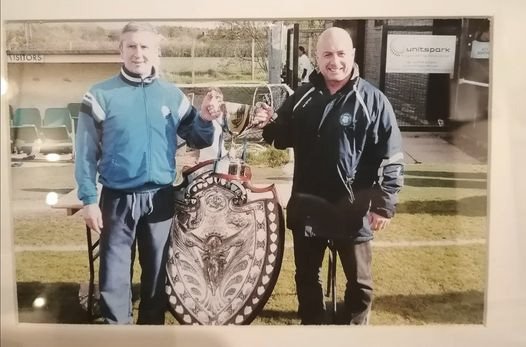